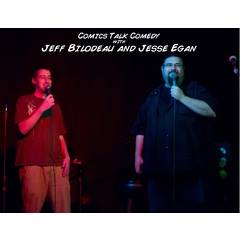 Curious about who my comic influences are? Did you know about the ska band I toured the US with as a teenager? This past weekend I was interviewed by Jeff Bilodeau and Jesse Egan of WS Radio’s Comic’s Talk Comedy show. Click the link below to catch a glimpse inside my head. Bilodeau was one of the first comics to book me from the open mics of SD, and I have been a longtime fan of Jesse Egan. To be asked to do their podcast was a goal of mine when I started to learn about the San Diego Stand Up Comedy scene. Glad these guys are looking out for us hungry comics, fighting through the circuit and comedy gauntlet.

I’ll write more blogs on this… but until then… enjoy! Thank you again Jeff and Jesse. Cheers!